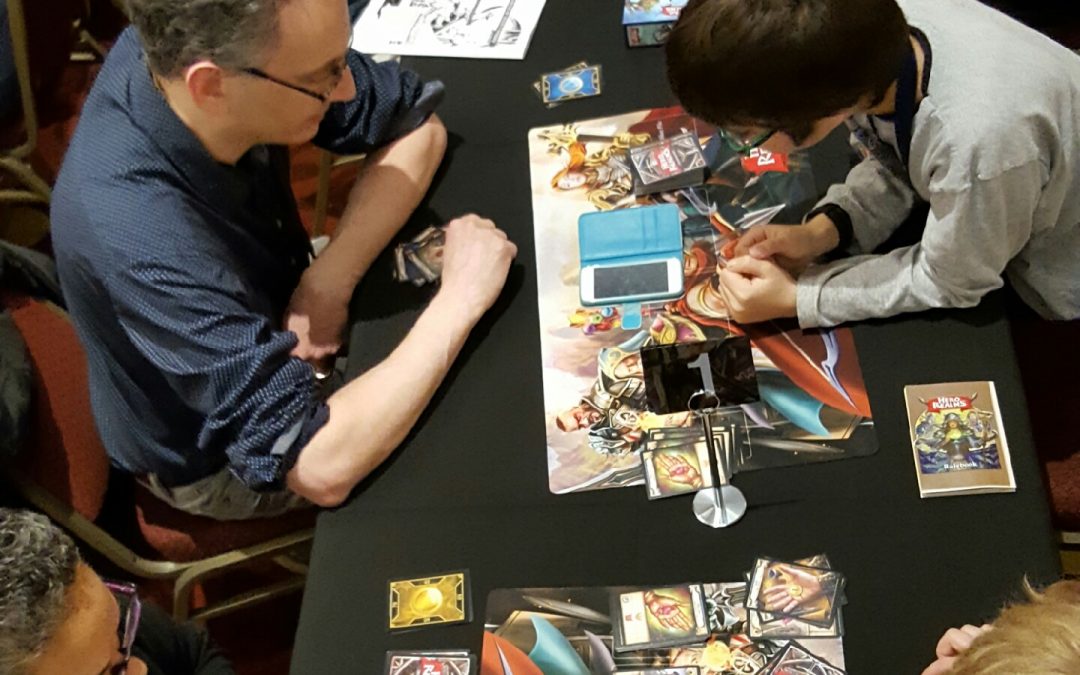 It’s the Monday morning after TotalCon. We’re tired, but excited. We met a lot of really cool people, got to talk to many fans, and (since we feed on excitement) we talked about every single one of our games.

TotalCon will go down in history as the very first Hero Realms tournament run by Wise Wizard. I had the honor of attempting to control the warring factions, and declare the eventual (temporary) Champion of Thandar.

We plan to run Legend Series events at Origins and Gen Con, but a smaller local con was ideal to help us work out some of the kinks that a Hero Realms tournament might throw at us and trip us up.

Eight players showed for the battle, which is a solid number for a con this size (entry to the tournament was free, with badge). We decided to run 3 rounds of Swiss, and cut to a top 4. Swiss rounds would just use the base game, and the players in the top 4 were asked to choose a Hero pack from the five available (players could choose the same Hero if they wanted to, though none did).

This is the format we were considering for the Legend Series. It’s possible that we might tweak that a bit, but the players seemed to like it..

Interesting rules questions came up, both in the first round:

-Deception says “Put the next card you acquire this turn into your hand”, and Bribe says “Put the next Action you acquire on top of your deck”. If both effects are active. You buy an Action, what happens?  Well, when two modifiers try to affect where a card will end up, the player gets to choose which effect affects the card. The other unused effect will wait around for the next applicable card (ie, it’s not used up).

-While walking around, I spotted a Bribe (the card, not an actual bribe) lying on the floor under a player’s chair. I interrupted the game, picked it up, and asked both players if it came from one of their decks. It most likely fell while shuffling. Both players had a Bribe in their decks (accounted for) and none could recall there being a third, so I determined that it was dropped from the Market deck. I shuffled it back in and play continued.  Had it come from one of the player’s decks, I would have put it in that player’s discard pile since it most likely fell from the discard pile/in-play.

Our top 4 turned out to be Marvin Birnbaum, his two sons Joey and Aaron (I didn’t ask their ages, but I would guess 10-12), and Alexander Oulette.  Alexander ended up taking down the Birnbaums, stealing victory (and Marvin’s Domination card) with his selection of the Thief. 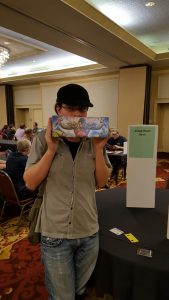 We congratulate Alexander on his victory, and we suggest you all watch out for Clan Birnbaum. Dad’s a pretty sharp player, and those kids are only going to get better. 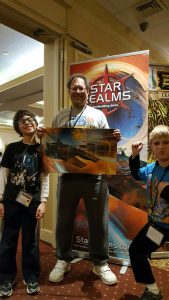 Our next show is PAX East. I hope to see some of you there!

Ian Taylor is a writer, comedian, game designer, and a Handsome Australian man. He travels in a giant metal rectangle powered by exploding dinosaurs. How cool is that?