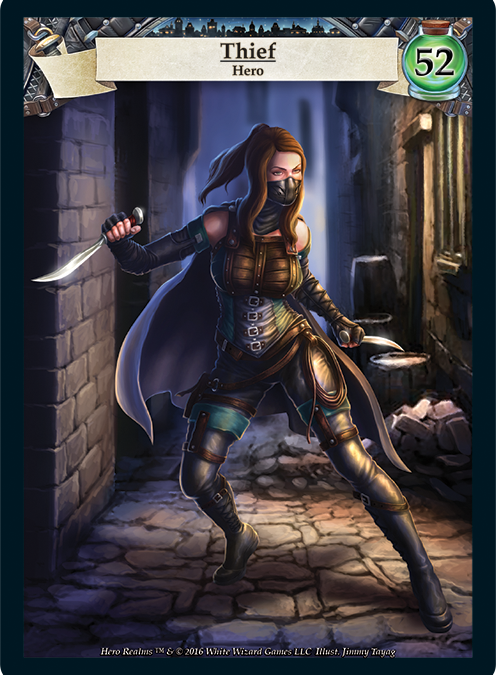 THE CITIZENS OF THANDAR: 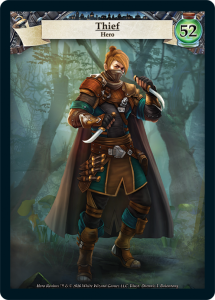 “Even the wiliest of travelers can fall prey to the wolves of Thandar. Thieves exists in any developed society, but the rogues of the port city have evolved their craft into something close to a religion. They see your goods as needing to be liberated, and they are the righteous avengers chosen for the task.” – The Emperor’s Guide to Thandar.

The Thief is an interesting Character to play in Hero Realms. The curious mix of Gold-producing cards mean that it is possible to generate 7 Gold on your first turn. In a game where the highest single cost is 8, that can be a pretty incredible advantage.

Add to that that, drawing all three Throwing Knives will generate 9 damage, you can see that the Thief can be formidable right out of the gate!

“Thieves will often use knives as a distraction. Having to pull a dagger from your shoulder makes an excellent distraction.” – The Emperor’s Guide to Thandar.

The wily Thief should, if possible, try to acquire Gold-producing cards, and cards that force a discard. This will allow the best use of your Abilities.

A simple and excellent use for leftover gold, the Pick Pocket ability is best used in conjunction with other discard effects. Since your opponent gets to choose the card they discard, they will always discard the weakest card in their hand. However, being forced to discard 2 or 3 cards can often cripple an opponent’s next turn.

Because of this, other discard effects go along great with Pickpocket. For example, play a Spark first, then if your opponent discards something important, make them discard another card instead of buying something from the trade row! In the later game, the Pickpocket ability becomes a lot more powerful, especially if your opponent has a hand with no garbage cards. 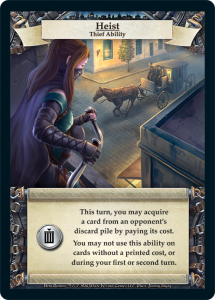 Who doesn’t love a good heist? One of the strongest ability cards in the game, the Heist allows the Thief to steal a card from the opponent’s discard pile. This is VERY useful in a multiplayer situation (where the opportunities are plenty), but can often swing a close two-player match. If you can take an opponent’s Arkus, Domination, or Fire Bomb, you’ll remove a massive threat to you, and generate one for your opponent.

That being said, there’s nothing wrong with taking something vital to both of your decks, for example the only sacrifice card in your opponent’s deck when both players are playing decks with little offense in them. Thieves are opportunists after all. Also, even if your opponent has nothing in their discard pile, you can stun a champion they control, then buy it from their discard pile.

Unless of course your opponent is also a Thief, in which case they’ll probably steal it back. Or worse.

“If you do find your coin purse missing, it’s best to just let it go. Many a traveler has perished by chasing their money down a dark alley. Consider it a donation to the city, and a costly lesson for you.” – The Emperor’s Guide to Thandar.

Let’s take a look at the cards in the starting deck: 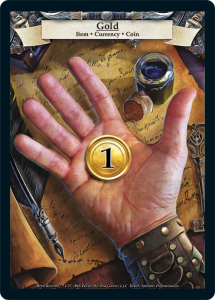 As usual, these will often be sacrificed first, especially as the Thief starter is so gold-heavy. That being said, take note of the board and your opponent’s deck as always when choosing what to sacrifice. Sometimes what you need is exactly 3 gold 2 ruby.

Rubies make the Thief starter explosively good at early game gold production. In the later game, they can be easily sacrificed, but are still the best card in your starting deck. If you find yourself reluctant to part with a Ruby, consider using it to buy a Fire Gem since they are far easier to sacrifice. 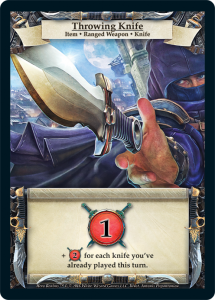 Throwing Knives are a staple for the Thieves’ early game. Three of them can take out the biggest Champion in the game (so far) by generating an incredible 9 damage. However, in the late game your deck will be larger, and drawing multiple knives will be tougher, making these a prime target for sacrifice.

While the Thief starting deck is strong in its buying power, and it quickly becomes replaced by better cards. If you, like a good thief, can maximize your opportunities and capitalize on your opponents’ mistakes, you can keep the pressure on and emerge victorious! 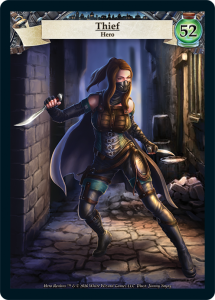