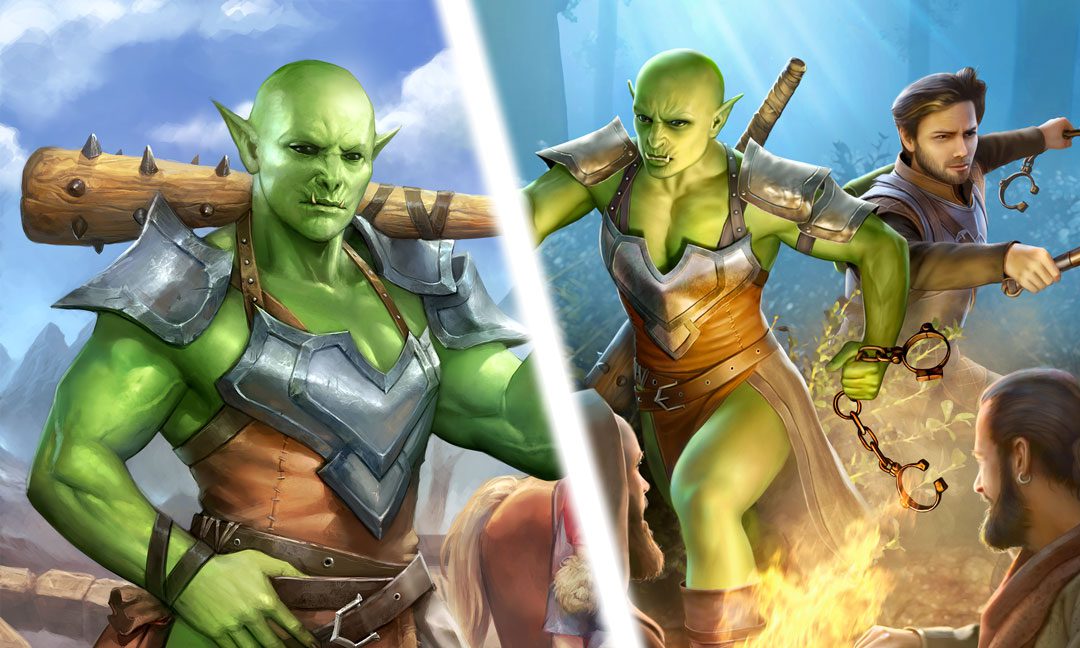 The Hero Realms: Journeys Kickstarter launches in November. Hero Realms offers players both a fast-playing competitive deckbuilding game, as well as cooperative adventures which mix in the teamwork, storytelling, and character progression of an RPG. We talk all about it here.

Today, we’re going to introduce a new type of card that will debut in Journeys: Quests.

“When do we get to the hitting part?” Lenka growled low so only Jeph could hear. She choked down another bite of charred rabbit and grimaced. Food should be raw and wriggling.

“Just a little longer,” Jeph whispered, placing a hand on her leg. It was meant as a gesture to be patient, but the ogre bared her teeth and her human partner snatched back his hand. “Sorry, sorry.”

The two humans sitting on the other side of the cookfire snickered. Lenka couldn’t remember their names and didn’t care to. She preferred to focus on what they’d be after she was done with them. She decided the bald one’s name was “Broken Jaw.” And the one with the beard would be “Whimpering.”

A bird call cut through the air. Broken Jaw rose and helped Whimpering to his feet. “That’s Remus. We’ll fetch him.”

Once they were alone, Jeph pulled a small vial filled with blue green liquid from beneath his tunic and poured it onto the cookfire. “All right, I’m going to go over the plan one more time. In about fifteen minutes you’ll hear some popping from the fire. That’s the dreamweed. When the tips of the flames turn blue, we hold our breath and – what are you doing?”

Lenka had opened her mouth wide and jammed in a couple of fingers. “Piece of rabbit stuck in my teeth.”

“Piece of rabbit….Right. So once the dreamweed pops and the flames turn blue we hold our breath and let the smoke knock them out. Once they’re asleep we’ll cuff Remus and –”

“Got it!” Lenka said triumphantly. She pulled the chunk of rabbit out of her mouth, considered it for a moment, then swallowed it.

Jeph frowned. “Did you hear anything I just said?”

They were posing as muscle for hire. Well, Lenka was – Jeph just set up the meeting. She figured Remus would want her to show her strength. Crush some stones, maybe uproot a tree. The usual. Then Jeph’s potion would do its thing (she had been listening – she just liked to give him a hard time) and they’d carry their sleeping bounty back to Thandar and pocket the reward. And if something went wrong, her fists were the backup plan.

Broken Jaw and Whimpering were returning to the camp. A human in a cloak followed behind. He must be Remus. The mark. Lenka didn’t know why there was an imperial warrant for the man’s capture and she didn’t care to. She just wanted the coin. 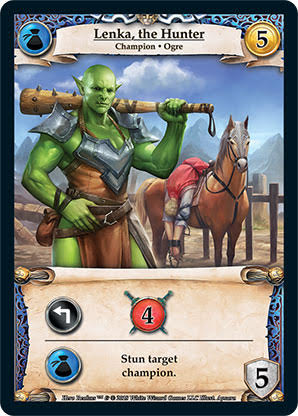 And then things got interesting. An ogre even larger than Lenka lumbered behind the humans. Looks like Remus already had some muscle on the payroll.

Jeph spotted the ogre a few moments after Lenka. His human eyes didn’t work as well in the dusk light. “Do you know him?”

Lenka made an offended face. “You think every ogre in the world knows every other ogre?”

Jeph put up his hands. “No, no. Not at all. I’m just asking if maybe you know this ogre…?”

“Yeah, his name’s Aruk. I worked a few jobs with him years ago before joining the Guild.” She stood and stretched, her massive bones cracking.

“That’s good then, right? That you guys know each other?”

Lenka watched Aruk lean down and speak into Remus’s ear. The outlaw drew a short sword from his cloak, said something to Broken Jaw and Whimpering, and pointed at Lenka.

“He knows what I do for a living these days,” Lenka said.

Jeph swore and stumbled to his feet. Broken Jaw pulled a rusted hammer from his belt and Whimpering drew a short-bladed dagger. They charged at Lenka while Aruk went around the other side of the cookfire toward Jeph.

Broken Jaw swung his hammer at Lenka in a wild arc. She took the blow on a forearm and slammed her fist into his face. His nose crunched and blood sprayed, and for a moment she considered changing his name. She shoved him into a tree and his body fell limp.

Whimpering buried his dagger in her thigh. She ignored the pain and closed her fist around his. She squeezed until the man began to scream. A kick to the chest broke something and the man crumpled.

Sparing a glance, she watched Jeph whack Aruk across the face with his sap then scramble away from the ogre’s long reach.

Remus stood before her, sword drawn. She smiled wide at the mark as she pulled the dagger out of her leg and tossed it aside. Remus turned to run but Lenka was faster. She grabbed hold of his cloak, turned him toward her, and lifted him off the ground. Her face was inches from his. He dropped his weapon.

“Yes,” the human said, and she could smell his fear.

She turned and saw the ogre held Jeph in his huge arms. One hand covered her partner’s mouth and Aruk’s other arm was wrapped around Jeph’s waist. It would take minimal effort to crush the life out of him.

“I try to keep things light.” Lenka spun Remus around in her arms and mirrored the way the other ogre held Jeph. “Hello Aruk.”

“Yeah, lance right through his guts. He’s all patched up now though. And as angry as ever.”

Remus was trying to say something underneath Lenka’s palm. “Shhhh,” she told him. “We’re talking.”

“I figure we have two choices,” Lenka said. “We could beat each other senseless.”

Lenka took a couple steps closer to Aruk and he did the same. The cookfire was a few paces to her left and his right. “You walk away. I give you a cut of the bounty. 20 silver.”

Aruk shook his head. “You know if I let you take him without a fight, my reputation is shot. I’ll never get another job.”

“What would your job prospects look like after I split your skull in two?”

“Same bad jokes.” Aruk said mildly. “We both know what happens if you fight me. And what happens to your boy.” He squeezed Jeph’s face ever so slightly and Lenka heard the muffled scream.

“You’re making a mistake,” Lenka said slowly. “It’s easy to get thrown off by the baby face, but he’s actually a man.”

Aruk gave no reaction and Lenka knew he was running out of patience. So she stood there silently, listening to the flames crackle. She could feel Remus’s heart beating fast against her arm.

“There is one other option,” Lenka said quickly, as she finally heard the pop pop pop. She pointed at the cookfire “There.”

Aruk’s brow creased and he turned his head toward the fire. “What? I don’t –”

Lenka held her breath as the tips of the flames turned blue. There was a puff of smoke and Aruk’s eyes went hazy. He took an awkward step, then another. His body relaxed, letting Jeph slip from his grasp and roll away. Lenka moved fast. She pulled Remus’s arms behind his back, clasped a pair of iron manacles onto his wrists, and tossed him onto his belly near Jeph.

Aruk was shaking his head to clear it, but he never had a chance. Lenka pulled her club from its straps on her back, planted her feet, and swung with all her considerable might. She caught Aruk clean across the face and his head snapped around. The ogre staggered and fell.

She knelt beside him and was relieved to find that the blow had not been fatal. This was just business. She stood up and slipped her club back into its straps.

“You think she listens to me?” Jeph laughed. He stepped aside and Lenka heaved Remus up onto her shoulder.

“Ask me if ogres eat humans.”

“Only if they can’t keep quiet.”

She set off and Jeph matched her long strides with quick little steps of his own. He spent the next twenty minutes going on and on about how well his dreamweed concoction worked. “It took me two hours to pluck it and another two to grind it. It had to be just the right consistency. Then I added exactly two spoonfuls of iron bark. That’s why it was so strong. I wasn’t sure it would work on an ogre, but it sure did. Good thing I told you to hold your breath, right?”

“Ask me if ogres eat humans.”

When playing with Quests, each player is given three random Quest cards during setup which are kept face down in front of them. You can look at your Quests, but don’t show them to your opponents.

Each Quest has a simple objective. 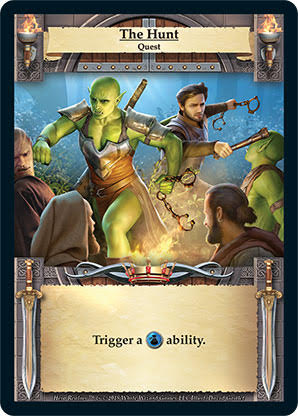 When you satisfy an objective, turn your Quest face up to show you’ve completed it, and then  acquire a Relic as your reward. (Note: You can only complete one Quest per turn.)

This expansion pack adds 12 new Items to the game, each of which has the term “Relic” on its type line. When you complete a Quest, you’ll get to acquire a random Relic to go into your deck for the rest of the game.

If you manage to complete all three of your Quests… you win the game!

That’s right, Quests add a new victory path to Hero Realms. It doesn’t matter if you’re down to your last few health – just complete your final Quest and you win!

We hope you enjoyed today’s preview. Come back next time where we’ll acquire some relics.

Look for Hero Realms: Journeys on Kickstarter in November 2018! In the meantime, sign up for our Hero Realms Journeys newsletter. Signing up will help you stay up-to-date on the campaign, but that’s not all. Your sign up will also donate a game to a children’s charity, and enter you to win a chance to become a card in Hero Realms. Click here to sign up today!